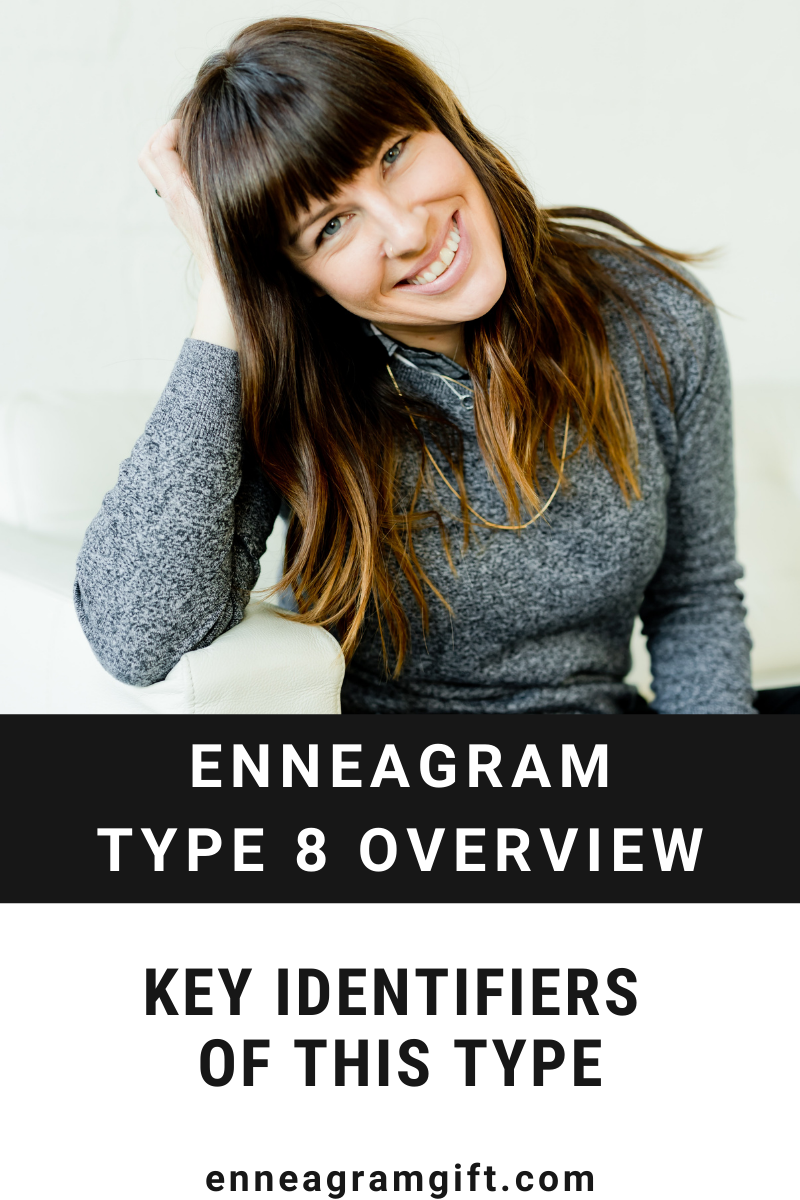 The Enneagram Type 8 is known as the Challenger or Protector. They are assertive, decisive, and rarely avoid confrontation. An Enneagram 8 is protective by nature, seeks to engage in meaningful work, and often takes charge of situations. They fear being harmed or controlled by others. Their greatest desire is to be independent and to stay in control. Living as an enneagram type eight is often a life full of motivation and leadership. Eights like to be in charge of their surroundings, and they defend their beliefs and opinions fiercely. An enneagram type 8 is confident and bold, so they aren’t afraid to stand up for what they believe is right. They thrive in positions of power, especially when defending matters of justice.

Eights rarely fear confrontation. They are comfortable standing up for themselves; however, it is easy for conflicts to escalate to anger if an eight is not careful. Type Eights are comfortable expressing their opinions, even if others don’t like to hear them. If there is seemingly no regard for their ideas or someone reacts with anger or spite, the conflict can quickly worsen.

Anger is an emotion that is strongly connected to type Eight personalities because they are a part of the Gut Triad. While many eights can use their anger or other intense emotions to propel themselves forward, it can become a difficult challenge for others.

Enneagram Eights want to prove themselves, so they are naturally motivated and self-reliant. They want others to view them as strong, so they work hard to resist weakness, dominate their surroundings, and take control of their lives.

A healthy enneagram type 8 can be very generous, kind, and considerate of others. They focus on using their leadership and influence to serve others and create good for those who may have less or face difficulty.

In higher levels of health, an Enneagram eight is upbeat, encouraging, and supportive voices in the lives of others. Their concern and empathy are sincere rather than a facade to advance their needs.

Healthy Enneagram type 8’s will lean into their ability to take charge while also carefully measuring how much energy and resources they can genuinely devote to a course of action. They can say no without regret and are willing to step aside to let others shine.

When healthy, an enneagram 8 is also sacrificial, humble, and willing to be vulnerable, rather than hiding their interior world to avoid appearing weak. An enneagram eight will more easily abandon a tough persona and allow others to help them process their emotions and needs with greater self-awareness.

The greatest fear of an Enneagram Type 8 is to be let down, harmed, or controlled by others. Enneagram eights build walls to protect their emotions when they let this fear take over. Enneagram Eights put a lot of effort into strengthening their ego to protect their feelings. They build up their sense of self which gives them a perception that there is still something to protect.

Unhealthy Enneagram Eights are egocentric and domineering over others, especially when they cannot exercise control over other people or their environment. When this happens, they can develop temper issues and lash out, and they struggle to be vulnerable with others. enneagraminstitute.com

An unhealthy enneagram type 8 can develop delusional ideas about how much power they have and begin to believe they are “untouchable,” in a sense. Because they create a false sense of being invincible, they over-extend themselves, which will result in a cycle of overpowering stress, burnout, anger, and fatigue.

An enneagram eight is known as a Challenger or Protector. While they aren’t afraid to fill the role of protector, they can take protection to an unhealthy level.

Often, an enneagram Eight will try to protect themself by shutting down emotionally and becoming stoic. Unhealthy eights become secretive and avoid vulnerability at all costs. A fearful Enneagram Eight will reject others first so that they can prevent experiencing rejection.

If their emotional state is under attack, they will use physical and psychological means to protect themselves. This strategy can damage their relationships and the very thing they aim to protect (their emotions). In a romantic relationship, an Eight is passionate and straightforward. They are present for the relationship and give it all the energy they have with an outstanding level of intensity. Still, they also need time and space to relax in their relationships.

Eights have a lot of passion and energy to put into a relationship, but they also require autonomy. They often will guard themselves to protect their inner resources, which can feel dismissive to those around them.

If an enneagram type 8 enters a relationship with a person that requires or provides a lot of attention, the Eight may begin to feel smothered, and a discussion about boundaries will need to occur. Again, when an enneagram eight shows up, they are 100% present, but they still need their space.

When two eights create a relationship, they can match the intensity of the other and recognize when they need space. They both speak honestly and openly, so neither fears there is more beneath the surface. Confrontation is easy and natural, so they can open up about issues and resolve them.

While they can be complementary, two eights together can also feel challenged by one another. The dynamics of this relationship will mean that both people need to work at being thoughtful and giving the other’s opinions sufficient consideration. If they can’t learn to compromise, significant problems can develop.

In general, an eight is an easy type to start a conflict with, and fights and arguments are bound to occur in relationships. When handled well, eights recover and can return to their partner’s passionate care and protection. However, it takes a lot of work and time to repair it when trust breaks down.

Because Eights can become guarded, conflict can be challenging to resolve when they arise because they build walls to protect their emotions. These walls can present themselves in physical or psychological ways. An eight may create physical space between themselves and their partner to preserve their feelings. In some cases, an eight may reject the other’s feelings or opinions to protect from feeling from rejection.

Enneagram Eights prefer to be in control, so working with others who micromanage will never feel fulfilling. Their desire to influence their surroundings makes them thrive in positions of leadership. Some good career choices for an enneagram Eight are:

While Eights feel successful in leadership positions, they also work well alone in competitive situations. Some other career options for an Eight that are more along these lines are:

Certain aspects of the workplace also help an enneagram Eight feel comfortable. Regardless of occupation, when a boss values an Eight’s opinion and considers what they have to say, an Eight feels more empowered and self-confident. When their peers or coworkers look up to them, they feel important to the world around them. This feeling of support can help them bring their A-game to work every day.

The 32nd president of the United States was gregarious and social. Many thought he was selfish and self-important, as he would walk with supreme confidence and look down his nose at others. His strong will and desire to appear strong aided him well in his presidential terms. He was able to perform exceptionally well under pressure. He led a nation through the great depression and World War II. He was responsible for the New Deal and played a large part in forming the United Nations.

Churchill was a formidable leader as a military leader, statesman, and prime minister in Great Britain. He had a straightforward, dominating presence. Many who worked with him became acquainted with his temper. Although he was intense and selfish, he wasn’t afraid to show emotion and even cry in front of others. He gave inspiring speeches, through which he cried and displayed great emotion. He brought many others to tears as well.

He led Great Britain through World War II, and worldwide, many consider him one of the greatest prime ministers of Great Britain. He never gave up, even if the odds seemed insurmountable.

His personal life is marked by unflattering characteristics of the type Eight personality. He had a temper and was highly opinionated. He was so strong-willed that he pushed his opinions too hard. He was highly competitive, and he allowed that to affect his friendships. Many suspect that mental illness also played a part in his overbearing behavior, but the sickness exacerbated his intense characteristics.

Ernest Hemingway was a novelist, journalist, and sportsman. He is well known for The Old Man and the Sea and A Farewell to Arms. His works feature straightforward conversation and commentary on controversial and taboo topics.

Some other famous people who possibly type Eight personalities are:

The core desire of an Eight is to protect themselves and have control over their life and destiny.

An enneagram Eight wants to hear that they are admirable and their opinions are valuable.

Because of their fear and desire, type Eight enneagrams are motivated to be self-reliant,  prove their strength, and dominate their surroundings.

The gifts of enneagram type 8 are:

Thing enneagram type 8s need to watch out for:

Further Signs Of An Enneagram Eight

This type finds it easy to stand their ground in conflicts, and confrontation is easy. They know what they believe, and they will guard it, protect it and fight for it if needed. They are great military leaders and politicians because of this. Eights can take the heat and withstand criticism. You’ll rarely find an Eight mulling over the criticism they’ve received.

An enneagram Eight feels comfortable in leadership positions. They don’t mind being the life of the party and enjoy the attention. They often prefer social roles where they have a large pool of influence. They like to be looked up to and regarded as significant, so often, they have a lot of friends and acquaintances. For Eights, public speaking is no sweat. Any opportunity to voice their thoughts and opinions is welcome, no matter the setting.

Eights are decisive. They know what they want and can easily make difficult decisions. After a decision, an enneagram type 8 will stick with it and defend it. They do not tirelessly overthink to make sure they’ve made the right choice because they base their choices on what makes sense to them according to their beliefs. They have strong instincts and don’t hesitate to act on them.

Enneagram type 8s like to be able to influence others but aren’t influenced easily by others. They resist criticism and advice from others, sometimes even to their detriment. They can seem stubborn and challenging to engage in discussions. But when they have something of value to offer, they will deliver it with excellent vigor.

If your instincts indicate you could be an Enneagram type 8 but still are a little unsure, you can take a test. We recommend the Truity Enneagram Test.

The Truity online Enneagram test will provide a score to indicate how strongly your answers identify with each of the nine Enneagram personality types. These scores are helpful because you can use them to determine traits that you are familiar with or recognize areas you overlook.

Truity also provides a six-page report of in-depth information and questions to help you identify your enneagram type. Over one million users have taken this test and have been satisfied with their results.

Want to pass on a test, or do you want to do more research to determine if you are an Enneagram Type 8? Check out the post:  Learn How to Find Your Enneagram With 4 Helpful Tips.